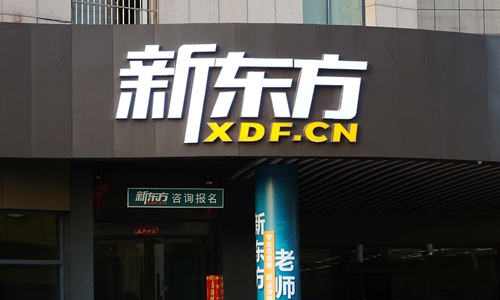 Many Chinese consumers said they did not expect to be able to learn English while shopping online.

Dong Yuhui, one of New Oriental’s teachers, has become a big hit on popular short video platform Douyin. In the studio, presenters like Dong present products in Chinese and English. For example, when Dong sells peaches, he also introduces the English word “peach”, as well as its use in a sentence and its derivative “peachy”.

Using this method, Dong sold over 6,700 peaches in just a few minutes.

Such a method of teaching English and selling goods at the same time quickly caught the attention of young people.

Yu Minhong, the company’s founder, also appeared in the studio, selling products with the teachers or hosts. So far, the studio has about 2.5 million followers.

Talking about selling products in two languages, Yu said that this is a very important transformation for New Oriental.

“They have grown from teachers to livestreaming hosts, which has garnered public attention and recognition, all thanks to consumer tolerance and support,” Yu said.

The New Oriental Education and Technology Group, which was one of the largest private education providers in China, laid off tens of thousands of employees last year after an education reform policy called ” double reduction” drastically reduced tuition and fees and ordered these institutions to transform into non-profit organizations.

In July 2021, China introduced a set of “double reduction” rules to ease the burden of excessive homework and off-campus tutoring for young students, to promote equality in the education sector by expanding on-campus courses for each student.

The policy aims to solve the most important problems of compulsory education – the excessive academic load for elementary and middle school students, and overheated off-campus tutoring, which has also overburdened parents financially and mentally, and seriously compromised education outcomes. reform.

Driven by the studio’s popularity, many live-streaming topics with cultural overtones quickly hit the hot search list. “I never thought I could learn English through a live streaming studio” quickly rose to the top of Douyin’s want list.

“It’s really a good deal to pay for knowledge and be rewarded with shrimp,” jokes a user.

“It’s really great for New Oriental teachers to have the opportunity to livestream,” another commented. “It has provided a new avenue for livestream anchors that consumers are welcoming.”

As the studio gained attention, sales also exploded. From Thursday to Friday, Oriental Selection’s live broadcast viewership increased from 650,000 to 7.6 million, and total single-day sales jumped from 980,000 yuan ($146,075) to more of 10 million yuan.

At first, Oriental Selection’s live broadcast was stalling. Yu often took care of the merchandise personally, and viewership numbers hovered around a few hundred for a long time.

Becoming a live broadcast presenter has become one of the main ways for teachers in education and training institutions to transform their careers. Other educational institutions such as Good Future and Doushen Education have also started selling teaching aids online, and their hosts are all teachers.

“Live streaming with cultural overtones is more likely to be accepted by young people and parents. They can buy what they need and learn at the same time,” a consumer named Guo told the Global Times.