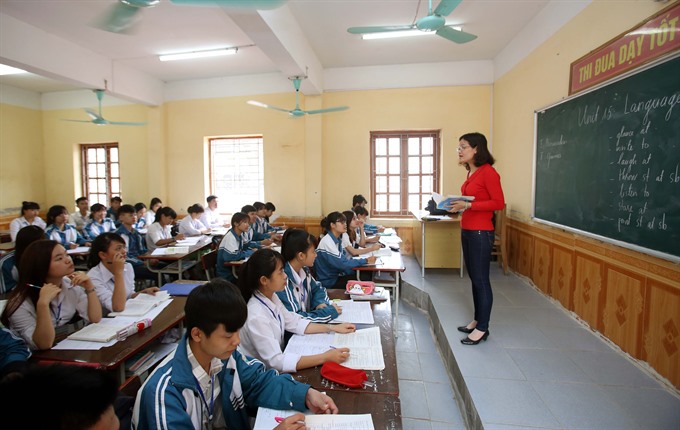 There are a limited number of secondary school teachers in Hà Nội able to teach their subjects in English, according to the city’s Ministry of Education.

The demand for English-speaking teachers for different subjects is particularly high in international schools and private schools attended by foreign students.

“We need to hire all English-speaking teachers because Vietnamese teachers who can teach in English are so rare,” said Phạm Thị Minh An, principal of Olympia High School, which is part of Olympia Inter-Grade Bilingual Schools in Hà Nội.

The international bilingual school Hà Nội Academy has the same problem, according to Nguyễn Thế Đại, president of the school’s school board.

“Việt Nam lacks teachers with international teaching degrees, and teaching is not a field that students who can study abroad often choose,” he said.

The shortage is not new. Over the past three years, some 400 technical English lessons have been delivered to science teachers at the University of Foreign Languages ​​and International Studies, in both basic and technical English.

However, the majority of professors do not feel confident enough to teach in English at the end of the program, according to department reports.

The same results were obtained for a pilot project for teaching science subjects in English in several high schools in Hà Nội, implemented two years ago.

Although they received 7-9 months of English training, teachers at these high schools could not get to grips with technical terms and were unable to plan lessons in English, according to reports.

This is a call for teaching faculties to focus more on teaching in English so that students have confidence in teaching in the language after graduation, said Chử Xuân Dũng, director deputy of the city’s education department.

“This will help meet the growing demand from high schools and reduce costs [of hiring native English teachers] for schools and parents,” Dũng said at a conference in Hà Nội last week.

Having anticipated the demand, in the 2013–2014 academic year, the Hà Nội National University of Education (HNUE) launched a new program that uses English to teach mathematics to its students.

The first group of students in the program graduated last year after receiving positive feedback from the high schools where they were interned, according to Professor Nguyễn Văn Minh, director of the university.

Three graduates of the program were recruited by Lycée Olympia for the 2016-17 school year after a two-month internship.

Phạm Thị Minh An, Principal of Olympia High School, said it was an honor to welcome the new teachers, but said the internship should last six months instead of two so they have more time to familiarize themselves. with the school environment.

“Teaching students should be proactive in contacting the schools they want to work in and requesting apprenticeships in their first year of college instead of waiting to be assigned one by their professors,” he said. .

It was not easy to create an environment where students could “live with” English and get used to using technical terms, said Minh, director of HNUE.

They also don’t have many internship choices since most high schools in the capital don’t teach in English, he said.

Dr. Nguyễn Văn Trào, deputy director of HNUE, said that the school will continue to train teachers of physics, chemistry, biology, natural sciences and information technology to teach in English in the coming years, with the aim to “quench the thirst” of international schools with English-speaking teachers.

The city’s education department will continue to integrate English teaching into the secondary school curriculum in more schools in the future, deputy principal Dũng said.

Specifically, students at Chu Văn An National High School in the city will be able to participate in a British A-level program in the next school year, for which the department has recruited physics, chemistry and biology teachers, a- he added.

The department will provide technical English training to teachers from five lower and upper secondary schools (high schools) in Hà Nội who teach math, physics, chemistry and biology in English, he said. — VNS