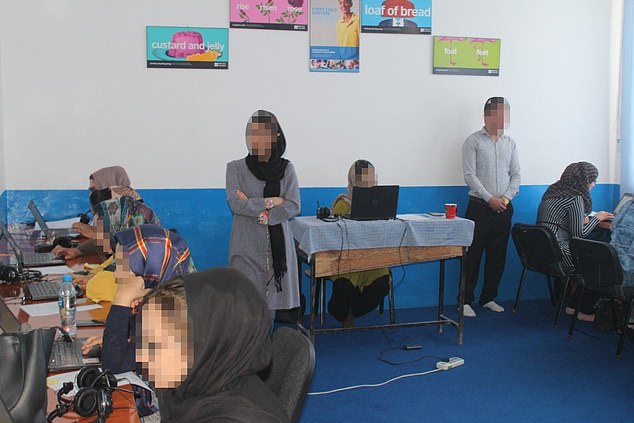 One who hides from the Taliban said she was terrified of being whipped or even executed because she worked for the British organization.

Another said she was living in fear and had burned all her documents to hide her links to the British. “If the Taliban find out that we worked with the British, they will kill us,” she said.

Dozens of former British Council teachers and workers who have applied to the UK for relocation under Afghanistan’s Relocation and Assistance Policy have been rejected or are still awaiting a decision. It is understood that some got the shrine.

A dozen of those left to the Taliban are women, and they feel particularly threatened. They taught English and also promoted Western values, especially to girls and women.

Sumaya, alias, is hiding in an apartment in the capital Kabul with her husband and three-year-old daughter. She fears that he too will be targeted.

“I was the face of Britain,” she told the Mail. “I promoted them in schools where many families saw. Everyone knew me.

“I taught the language of their Christian enemy, their goodness and their values.

“It makes me and other teachers a target of the Taliban. I don’t understand why I was left behind, why I didn’t hear anything when the risk for me and my family is so great?

The 29-year-old, who worked in northern Afghanistan, said she applied with colleagues to the ARAP program three months ago. 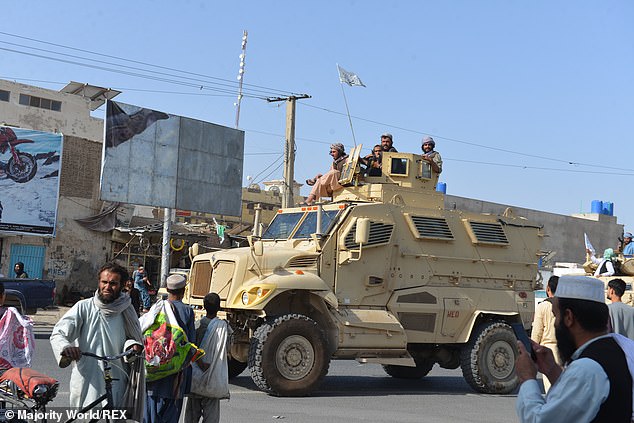 Dozens of former British Council teachers and workers who have applied to the UK for relocation under Afghanistan’s Relocation and Assistance Policy have been rejected or are still awaiting a decision. Pictured: Taliban fighters celebrate in Afghanistan on September 1, 2021, after the last US soldiers left the country

She received only two emails in response. The most recent told him, “Stay in a safe place. We are worried about you.

She said: “What happened to us is extremely cruel. Surely we should have been eligible for relocation as women who were the voice of Britain.

‘But there was nothing. If we had worked for the United States, we would have been rescued and safe by now. ARAP did nothing for us. I have been waiting for three months and now I am forced to live in hiding, fearing that the Taliban will come knocking on my door. It’s very scary because I wonder why we were left behind.

“Flogging me in front of the public could be the punishment. It is a crime for the Taliban for a woman to work this way.

Some Afghan teachers, trainers and managers who applied under the ARAP say they were rejected because they were contract employees and not directly employed by the national government.

They were, however, paid by the British Council. Sumaya said the Abandoned were particularly angered that some Kabul-based Council staff had sought refuge in the UK.

Another woman who worked for two years on the English for Afghans program said she lived in fear of the Taliban knocking on the door. She and her mother, who also served the Council, can no longer leave the house without a male escort. The woman said she feared being forced to marry a Taliban fighter. She said she would rather kill herself. “It would be better for me,” she explained.

She is furious that the UK did not allow those working on the English for Afghans program to join the ARAP evacuation programme. “I don’t know why we were left behind. We served them, they left us,” she said.

Sumaya, who worked for the British Council program for two years, said fears grew after one of his colleagues was followed home by members of the Taliban. 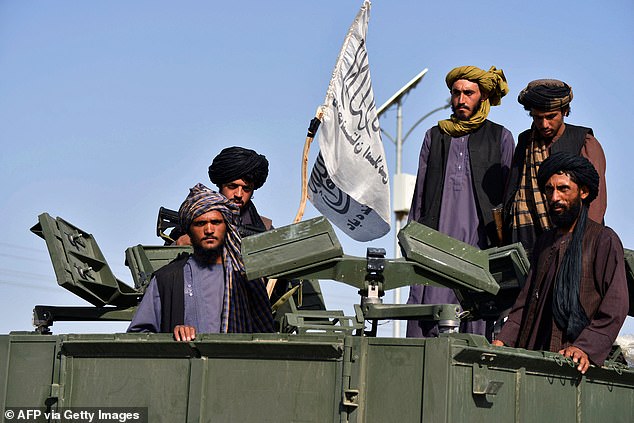 Sumaya, alias, is hiding in an apartment in the capital Kabul with her husband and three-year-old daughter. She fears that he too will be targeted. Pictured: Taliban fighters stand on an armored vehicle before marching along a road in Kandahar on September 1, 2021

“He escaped but thought they wanted to kill him,” she said. And she pleaded: ‘Please the British Council, please ARAP and the Foreign Office, give us hope. Do the right thing and act quickly to approve our cases.

“There are no flights and no safe passage at the moment, but if we have the documents from Britain then a third country is a good option for us – at least we would be safe.”

Concerned teachers and former Council staff have contacted the Daily Mail to ask that their cases be highlighted as part of the Betrayal of the Brave campaign.

An online campaign set up under the title: “Save the British Council educators from the Taliban” had attracted 135,000 signatures yesterday.

Dr Julia Cave Smith, an education consultant who worked with some of the teachers, described as ‘inhumane’ the treatment of one who had been branded a spy and feared being beheaded.

The Council said the Ministry of Defense had the responsibility to decide who was on the ARAP scheme.

A spokesperson added: “We are not involved in the decision-making process, although we will of course work closely with the Ministry of Foreign Affairs and Ministry of Defense to do whatever is in our power. authority to ensure that all applications from current and former employees and contractors of the British Council are given the fullest possible consideration. 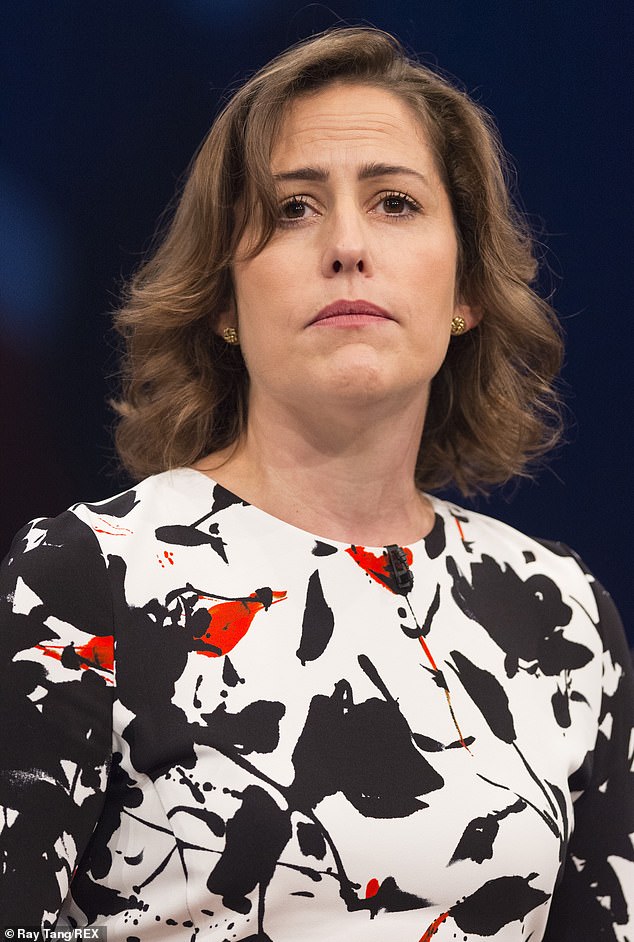 Fears are also growing for Afghan women MPs, whose plight has been described as ‘terrifying’ by Home Secretary Victoria Atkins (pictured)

English for Afghans was a British government-funded English language teaching program rolled out across Afghanistan from 2017 to 2020.

It was broadcast in 15 provinces to 60,000 children as well as many officials and religious leaders.

A senior member of the British Council who oversaw their work said: “Now the Taliban are on a rampage all over Afghanistan, they are particularly keen to persecute and kill those who have represented international organisations, especially those linked to the Kingdom. United States and the United States”.

“When we needed them to help us implement this program, we asked for their commitment and professionalism, and we congratulated them on the excellent work they were doing. Now they are highly visible – and susceptible to being captured and killed by the ruthless and bloodthirsty Taliban.

Fears are also growing for Afghan women parliamentarians, whose plight has been described as “terrifying” by Home Office Minister Victoria Atkins. 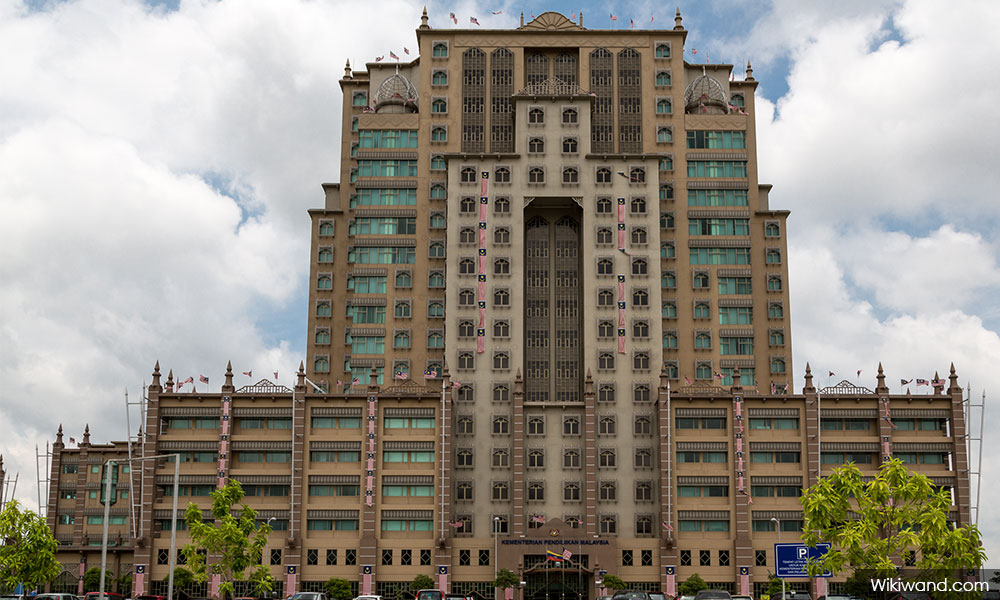 Ministry of Education urged to rethink Mute for English teachers