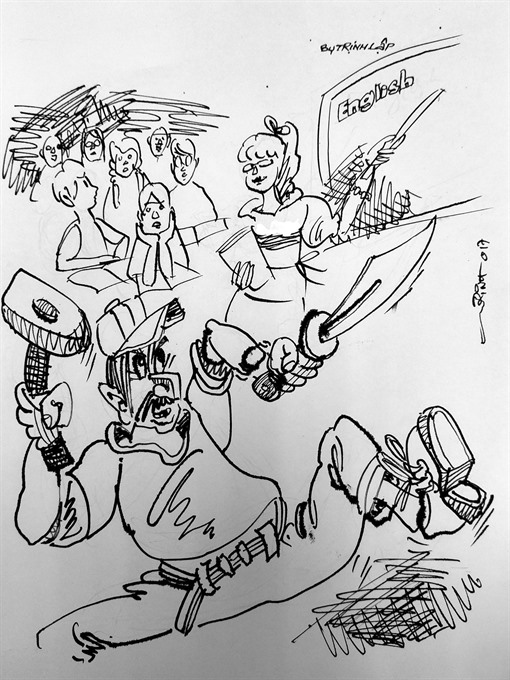 Teaching and learning a foreign language is not easy.

If the teachers themselves started learning the language late in life, and if they learned it from non-native speakers, the task becomes even more difficult.

In this sense, a native accent is useful, but not essential.

These aspects of learning and teaching came to mind following strong reactions to a video posted recently by an American English teacher in Việt Nam.

The video, posted on YouTube, highlighted common English pronunciation errors by some teachers and students at several English teaching centers in Hà Nội.

The American invited his parents to be part of his video, asking them to listen to Vietnamese teachers and students speaking in English to show if they could understand what was being said.

Having no prior experience of interacting with native Vietnamese speakers, the parents obviously struggled to understand certain phrases.

The American teacher said his goal in posting the video was to help Vietnamese people find out their pronunciation weaknesses and emphasize the importance of good pronunciation.

“You will have to experience speaking English to foreigners. This will be the moment when you realize that you have chosen the right word, the right grammar, the right pronunciation, but your foreign friend still has the reaction, “huh?”

The video garnered two million views and sparked a storm of controversy within the community of English teachers and students.

After the posting, four English teachers featured in the video posted another video explaining their mistakes and apologizing to their students. A teacher was in tears as she apologized for her poor pronunciation.

The video angered many viewers, but there were also angry praise and retorts.

One, called Kem Su, wrote, “Those who criticized this American teacher obviously have nothing to do with their lives. Americans are known for their righteousness. If you’re wrong, they’ll point it out.

He said the video revealed very basic mistakes made by teachers and questioned the wisdom of opening an institution and teaching poor pronunciation. He lambasted the centers for wasting and ruining children with “poor education”.

Nguyễn Huy Lê saw it very differently. “The way he criticizes others in public is not good behavior at all. Even if you are a foreigner, it is…unacceptable. He noted that most of the centers were for adults without basic knowledge of English “If your children already speak good English, you should take them to the center where this American teacher teaches.”

“Those who don’t pronounce English very well can still make themselves understood by foreigners, like people from Hong Kong or Singapore,” he said.

“Each nation has its own language. We learn English to study and communicate, not to become foreigners. Personally, I don’t like what this American teacher did to these teachers.

Lê and many others criticized the American for smearing the image of teachers, for using images of centers and teachers without blurring them to hide their identity.

In response, the American teacher said his only goal was to demonstrate “a simple and fair test” of people’s pronunciation. He also said he did not make the video to make money or attract students to where he teaches.

I think we should take his statements seriously. He had already gained some fame for having made several funny videos that attracted millions of views, such as “5 things in Việt Nam that I can’t understand”, or “18 words that every Vietnamese pronounces wrong”.

However, it’s undeniable that there was some cultural insensitivity involved in her last video. But the damage is done.

I think Vietnamese teachers should take this as constructive criticism and use it to improve their skills, and the American should learn to criticize without offending people.

Can native English speakers pronounce our language like a native?

Just as there is Singlish, Hinglish, and other forms of Indian English, Vietnamese have their own way of speaking the language, which is just as valid as any other. We are neither American nor British, we have our own way of speaking English and we will continue to improve. —VNS